Here’s How The Body Stores Emotions

Disclaimer: Some of the links in this post are affiliate links and I may receive compensation if you make a purchase through them. I only recommend products I know and love! Thank you for your support.

The body stores emotions, carrying the emotional memories of all our joys and all our sadness. If this sounds like more new age nonsense, think how knotted and stiff the shoulders become when we're stressed. Think how butterflies float in the tummy when we feel love or excitement, but how nerves make the belly toss and turn.

Perhaps many of us understand how we feel emotions in the body, but do we really store them?

We'll get to the science behind this in a minute, but let's first talk about this from the perspective of yoga, which has understood this connection for centuries. We open our hearts in backbends, and surrender through forward folds while loosening the hamstrings, which are connected to our ability — or not — to let go. The hips hold on to sadness, and the liver to anger.

If you have ever felt emotional or even cried during yoga, this is why: as we move through asanas, we literally twist and bend the stagnant emotions out from our bodies. Because the body stores emotions, moving and breathing creates space and helps us process these feelings on an energetic level.

These places are so often tight because we hold on to feelings, replaying circumstances in our minds, holding onto grudges, anger, and resentment. Even if we believe we've forgiven on an intellectual level, what does the body say? Have we really let go?

If you'd like to learn a set of yoga poses to release stored emotions from the body, download the free guide below.

Dr. Candace Pert was a pioneering neuroscience researcher who, while still a graduate student at Johns Hopkins in the 1970s, discovered the brain's opioid receptor. She died in 2013, but not before continuing groundbreaking research into the mind, straddling the uncommon line of hippie and hardcore scientist.

She appeared in the film What the Bleep Do We Know (an awesome, accessible quantum physics flick for those who want to explore the rabbit hole) and wrote an equally amazing book, Molecules of Emotion: The Science Behind Mind-Body Medicine.

"Your body is your subconscious mind," Pert has said, according to her website.

Psychologists often blame mood disorders on unbalanced neurotransmitters in the brain, but did you know the stomach has so many neurons — more than the peripheral nervous system — that some researchers call it the "second brain," reports Scientific American?

The integration of mind and body doesn't stop there, leading Pert to declare that the body cannot be discussed as separate from the mind. They are intricately linked, each influencing the other down to behavior on a cellular level.

According to Pert, emotions trigger the release of special compounds known as peptides stored by the body, whether in a tissue, organ or muscle.

"To feel and understand means you have worked it all the way through. It has bubbled all the way to the surface. You’re integrating at higher and higher levels in the body, bringing emotions into consciousness."

Or in yoga terms, you've got to feel it to heal it. That's how the body stores emotions. Download the free guide below to learn how to release them from the body.

In a real life example, someone very close to me has a very difficult time expressing her emotions. Growing up, she learned that emotions were something to be feared, something that made her weak.

In response to traumatic life circumstances, this person shut down instead of reaching out to people around her. She pretended everything was fine even though she was clearly suffering inside.

This person ended up with severely arthritic hips and needed a double hip replacement before she turned 70.

Of course, other factors influence the development of disease and poor emotional health does not with certainty cause arthritis. I also take care against blaming people for their health problems. People always do the best they know how, and we don't have control over many things in our lives. However, I believe the case study still has merit to show how the body stores emotions.

As an example on the other side, is the woman I studied with for my yoga teacher training. This woman is highly realized and spent many years studying in India. Decades ago, the bulk of her practice was Ashtanga, an extremely rigorous type of yoga.

Today, she says, she focuses more on meditation and Bhakti (devotional) yoga than the physical type. However, she's still extremely strong and flexible and I've seen her feet come close to touching her head in king pigeon despite her no longer having a rigorous physical practice. As she says, open mind, open body. Without unexpressed emotions, the body is free to enjoy unrestricted movement.

Once we stop clinging to old thought patterns and beliefs, and release emotions that are stored in the body, we become free. 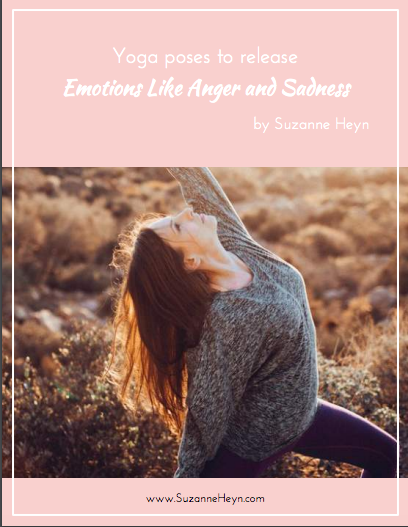